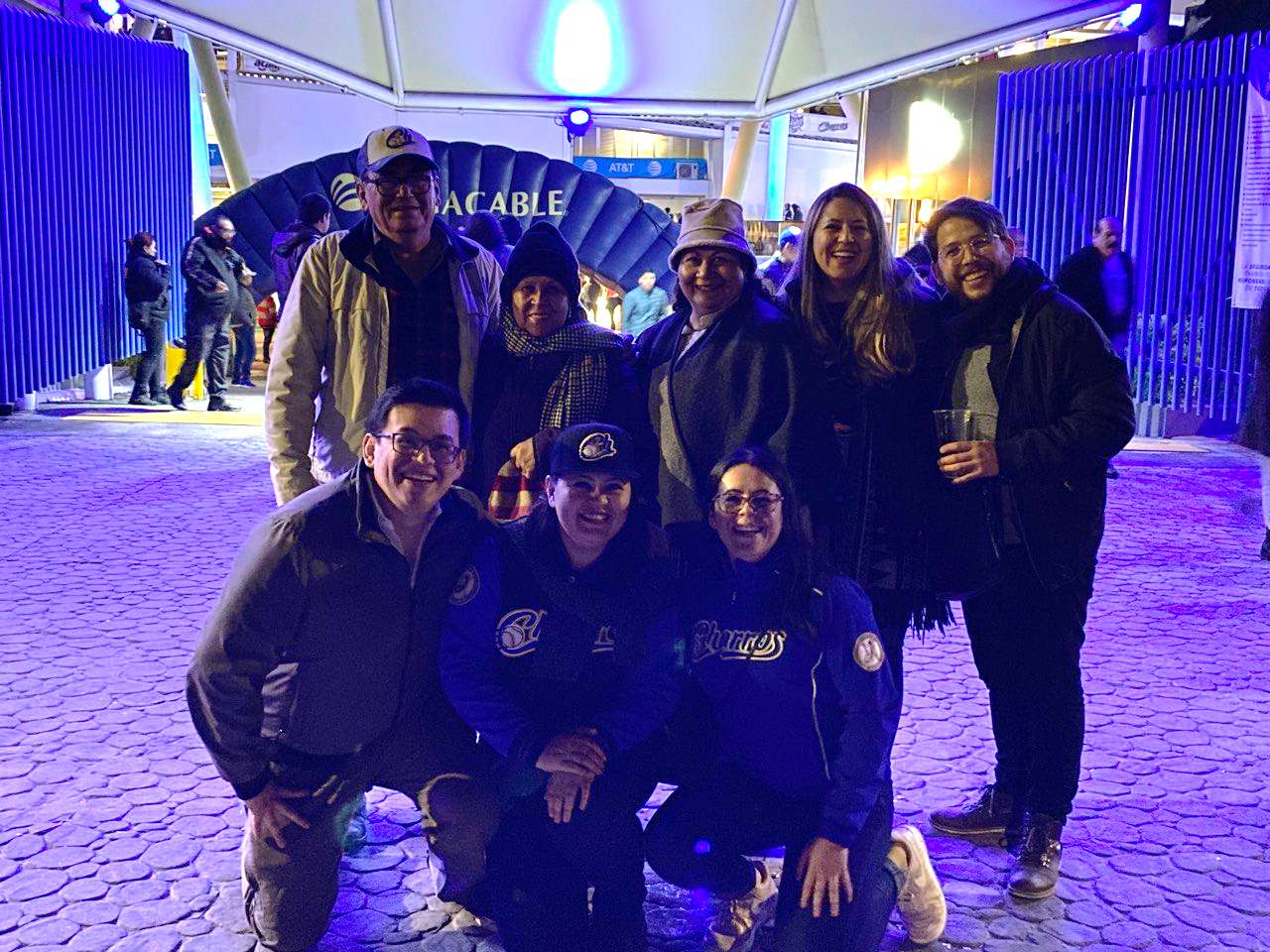 This year I became intrigued with baseball. My sister Martha, a longtime fan & former softball player, got us (me, family & friends) to attend our first couple of ball games. I liked it far more than I expected! I loved the stadium atmosphere and specially the excuse to spend several hours in an open-air setting hanging out with friends, enjoying comfort food & drinks…

But the big surprise for me were the complex rules of baseball. I had only a patchy & vague cultural familiarity with the sport but after hours of careful attention & many many questions I started to internalize how it works. To my surprise, following the game soon became a lot of fun. The way baseball focuses & sustains attention is so different from the clock & score of soccer! I’ve been thinking about it for a while now and of course I ended up making a diagram: 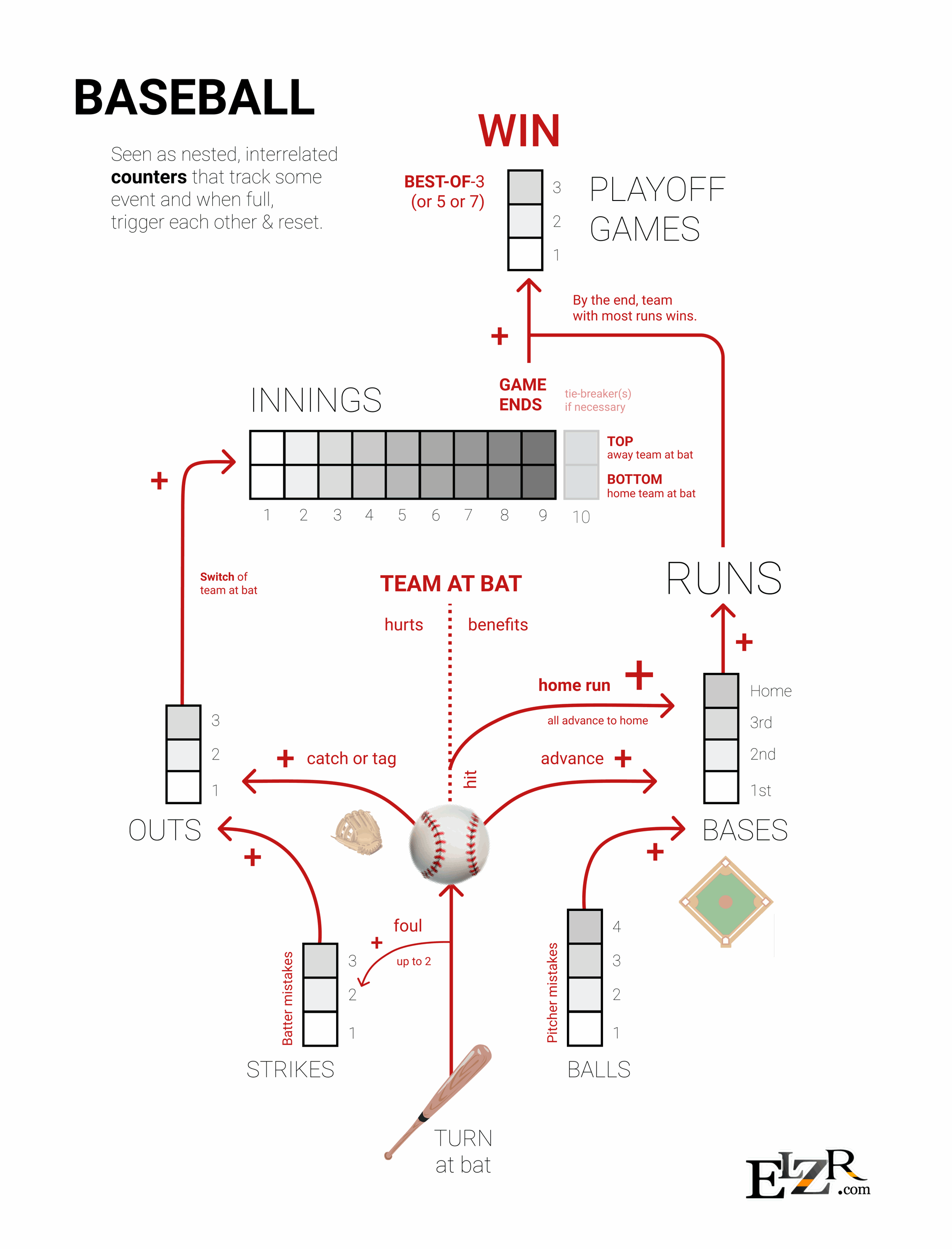 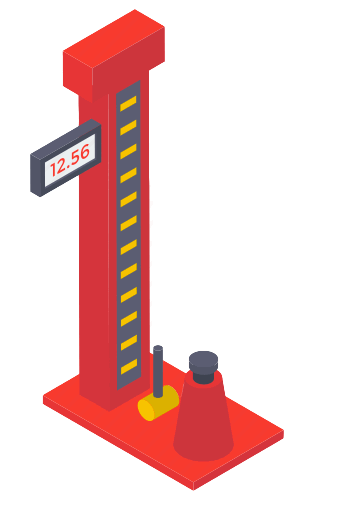 The key for me was seeing baseball as made out of a special kind of counter: one that tracks some event (positive or negative) and, when full, triggers some other counter & resets. It’s like those high-striker games to test your strength at old-time fairs: a meter that dings when maxed, then falls back to zero.

The visual representation I came up for this abstract kind of counter is a shaded grid where each cell is marked when its tracked event happens.

This scheme is then adapted as needed. For instance, the innings counter is filled top-down then left-right.

Such counters, nested & interrelated, give baseball (and other bat-and-ball games, like cricket) their particular feel & drama. Without a clock, they give playtime a punctuated, textured narrative. They incrementally build both positive & negative tension and it’s always uncertain when or how it will be released. Then they start all over again.

This counter perspective can be pretty abstract (my friend Max called it a baseball state-machine) but the game has evolved several ways to flesh it out. There is, for instance, a huge, detailed scoreboard where several of these counters are shown to all. Notice how the innings display is filled with how many runs where scored at each inning, to preserve the narrative of how we got to the total run count. 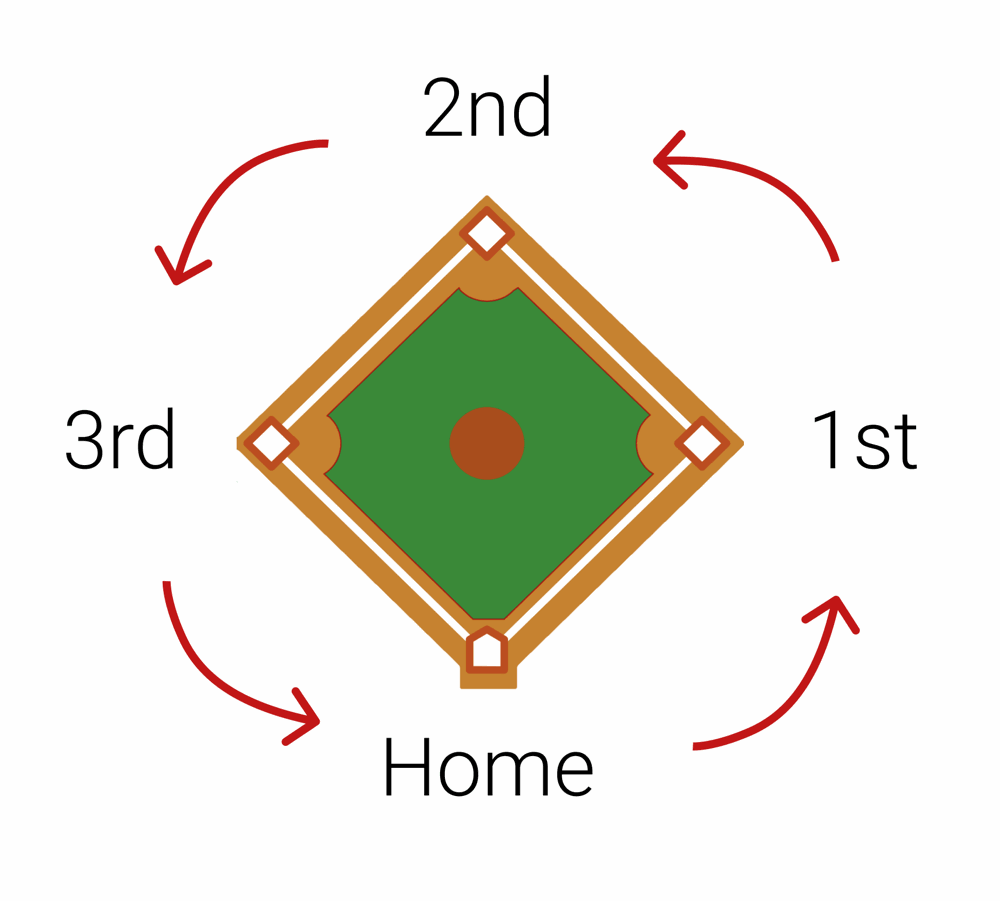 But my favorite trick is that the diamond field itself is such a counter. Each vertex is a step in the count and players running counter-clockwise from vertex to vertex is how the count increases.

The diamond-field-as-counter is particularly rich: each of the first 3 tension-building steps (bases) can be occupied or not at the same time by up to 1 player: the more players, the more tension, because each time one reaches the max step (home) it’s another ding. So if you have a full house (a player in each base) and the batter scores a home run you get 4 dings of the base counter at once: 4 runs!

It all started with back-of-the-napkin sketches and eventually a digital sketch on iPad-app Concepts: 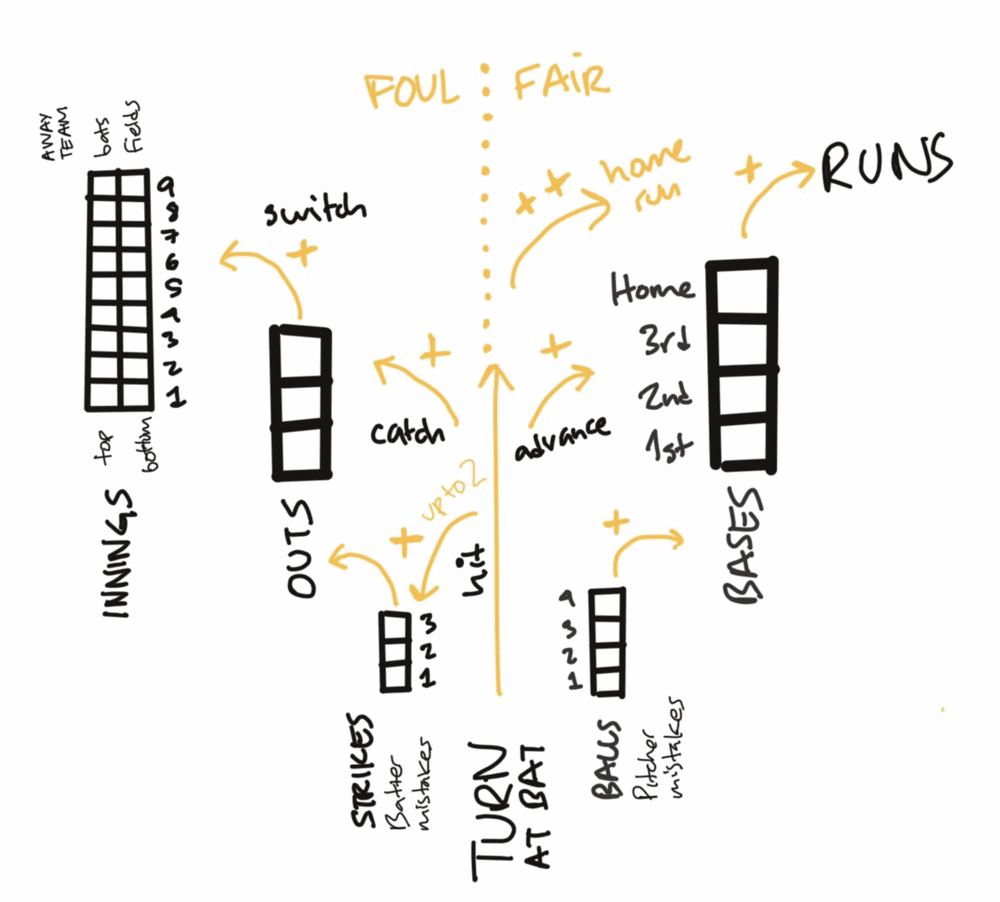 The final diagram I did on lovely Figma after many many experiments & tweaks. From the beginnning, a “batters point of view” lead me to a vertical layout but a horizontal one also works and may “read” better since it flows left-to-right: 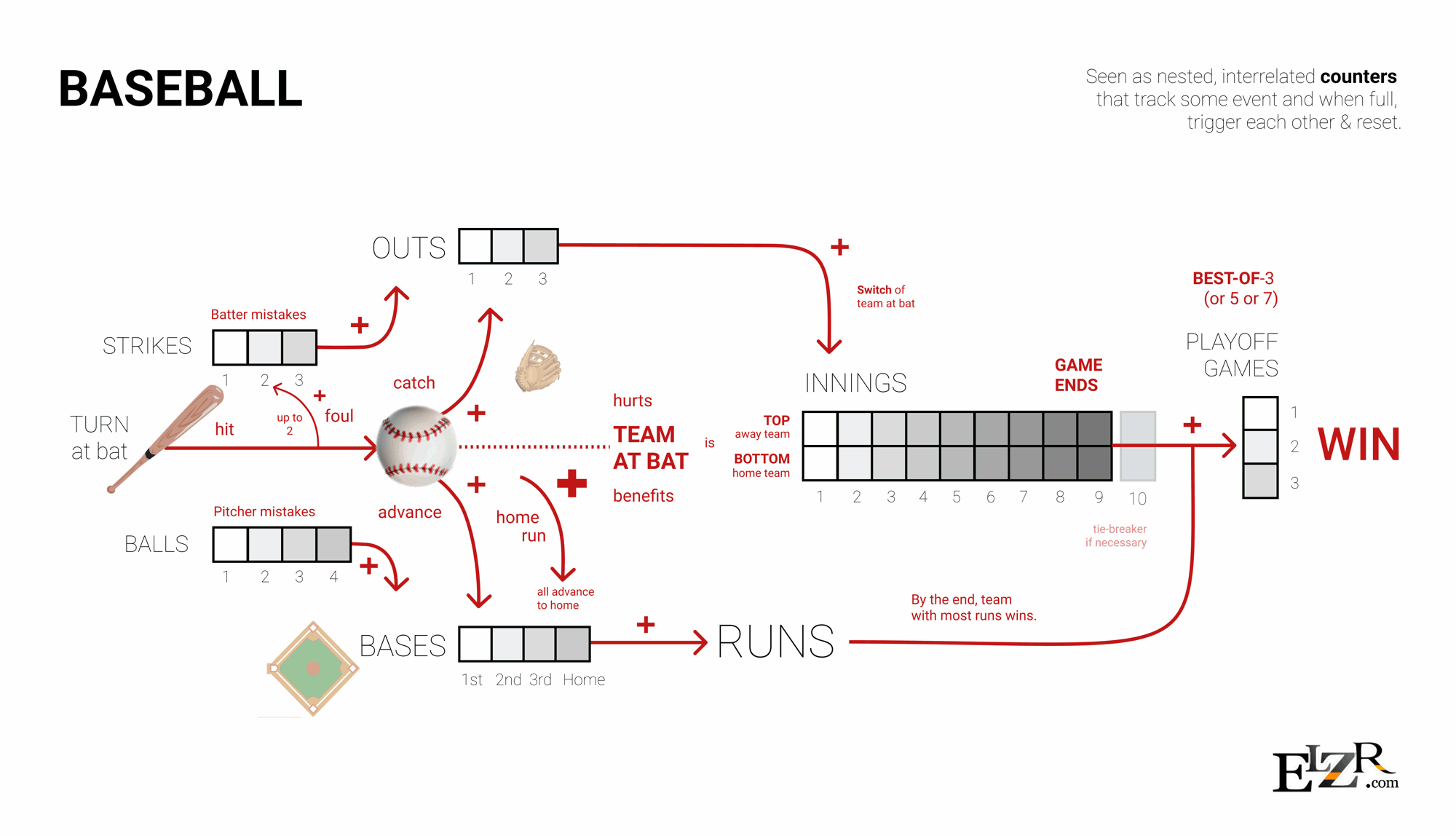 How I came to think about counters

Back in 2014 I made a list of the 5 things I was most passionate about: online communities, learning, interface culture, documents & counters. It remains a map of my heart & mind. What I mean by counters ever since is ways to sustain & channel our motivation & attention, artificial mood systems. Once you learn to see them they’re all around you, a hidden layer of affordances crucially shaping your experience into a narrative.

Examples? Prayer beads are ancient counters you hold in your hands. Calendars themselves (a lifelong obsession of mine) are counters that carve dates out of the endless cycles of nature. And you can use calendars in particularly counter-y fashion, like with don’t-break-the-chain streaks. I’m a big fan of the bullet journal community, here’s a spreadsheet counter inspired by them to track daily habits in the shape of months: 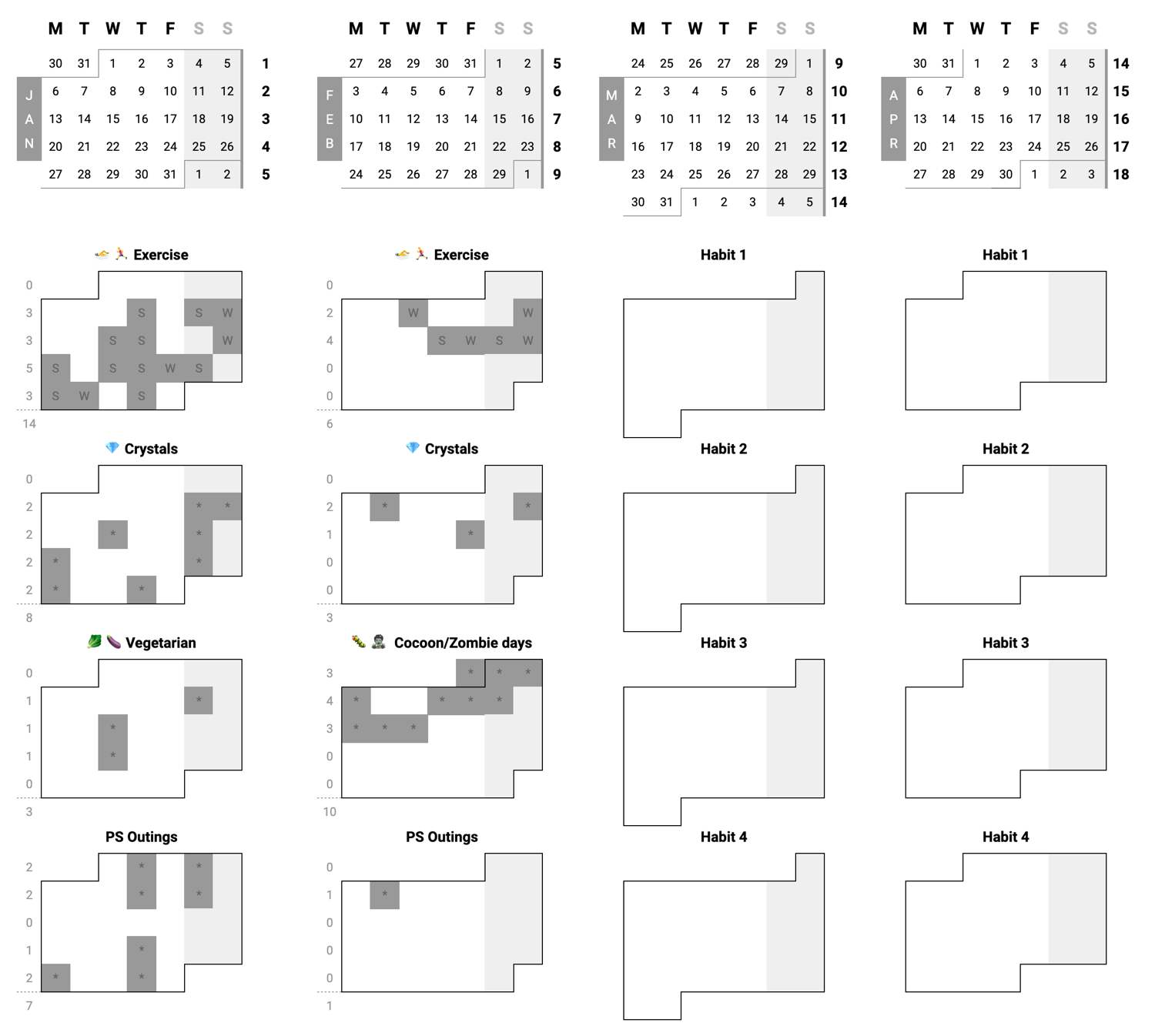 And as we saw here, at the root of baseball, “America’s national religion” there is a complex network of counters!